Last night my husband was meeting a friend for dinner, so after I dragged my sweaty butt home from yoga, I decided to make a super fast recipe of Martha's because I'm always ravenously hungry after yoga.

*sidenote* While I was cooking this dish, I ate some cherries, which are coming into season right now. They're delicious and addictive, and unfortunately I seem to have eaten a few too many yesterday because I forgot about the copious gas cherries always give me. Why, God? Why can't I enjoy cherries gas-free?

So anyway I'd bought a pound of frozen shrimp from Target, of all places, super cheap ya'll. Pre-peeled, deveined, no tails. That's the way to go, if you ask me. Sure, fresh shrimp are incrementally better, but deveining shrimp grosses me out. Thawing frozen shrimp is a cinch - just dump it in a big bowl of cold water for 10 minutes.

Part of the reason this recipe is so fast is because you barely have to chop up anything. You just have to mince some garlic.

I will say that on the medium-high heat that the recipe calls for, the grape tomatoes made the olive oil in the pan go completely nuts and I am still going to be cleaning that up later this morning. Probably if I had dried the tomatoes off after washing them, it wouldn't have been such an oil explosion.

Also, I want to add that normally I am not a huge fan of arugula, although I want to be. It's supposed to be chock full of all sorts of crap that's really good for you, but I just can't stand it in a salad. In this recipe, however, it tastes awesome. The bitterness of the arugula is balanced nicely by the sweetness of the shrimp.

*sidenote* I was so ravenously hungry, that I completely forgot to take photos of the whole process. I only have pictures of the end result. Boo, me!! Next time I will do better.

So, here's what the end result looked like, with a side dish of quinoa (I'm trying to get more healthy fiber these days and if you believe the hype, quinoa is what God wants you to eat. It's good - like a slightly crunchy couscous). 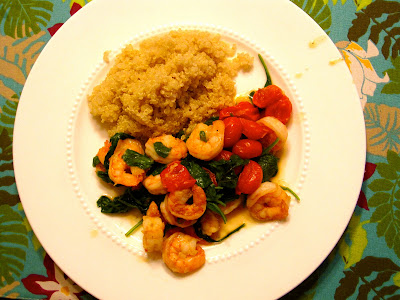 It was really good, and after the shrimp thawed it took about 10 minutes to make. Here is the recipe, since it's not up on Martha's site yet.

In a large skillet, heat oil over medium-high. Add tomatoes and cook, stirring often, until they blister, about 2 minutes. Add garlic and cook until fragrant, 30 seconds. Add shrimp and cook, stirring often, until almost opaque throughout, about 4 minutes. Add arugula, season with salt and peppeter and toss until wilted, 1 minute. Add lemon juice and toss to combine.