I tell ya. Buying a house with your spouse (I'm a poet and didn't know it) and hiring various people to do work on it will either be the impetus that drives you to divorce or will forge your union into unbreakable steel.

The jury is out on my marriage.

But for reals. The deal is we have this little guy, Sergio, putting in a few doors for us and installing baseboard. He is a carpenter, as you might have imagined, and he has another little guy helping him out. I call them little guys because I'm 5'9 and they're like 5'4. 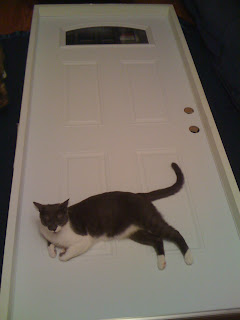 Murray enjoying the new front door, pre-install
Anyway yesterday Sergio and his little buddy put the wrong door in where they should have installed a fire door that we special ordered. And my husband came home and FLIPPED HIS SHIT.

Now in theory, I should have caught this mistake yesterday, since I am home "supervising" Sergio and his little buddy. Because I am a construction manager. But the thing is, my husband and my father-in-law and my father-in-law's plumber buddy, Frank, seem to think Sergio is like the second coming of Christ, he is that good of a carpenter. So my modus operandi yesterday was to leave the magician to his work and not distract him. And that is how the wrong damn door got installed.

Pebbles, right? Not boulders? Like, worse things could happen. Sergio could have accidentally cut my hand off with his table saw. That would be bad. 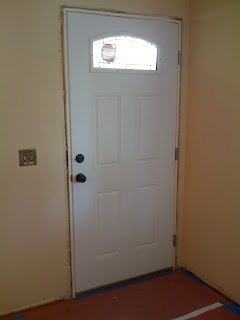 They say that installing a new front door is the No. 1 thing you should do if you're trying to sell your house. It will get you the highest return on investment of any home-improvement project there is. Aren't I quite the smarty pants?! Also, how do you like that brass switch cover? That's some sassy shit, no?
Posted by Erin at 9:28 AM