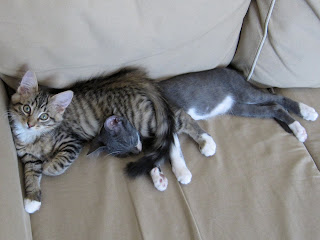 When we adopted Simon and Murray in July, 2009, I asked the Humane Society if they knew what the boys' birthday is (they're brothers) and they guesstimated it was May 15, which would make their first birthday tomorrow. 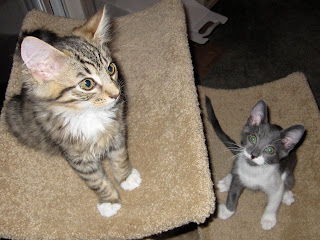 Simon on the left, Murray on the right
When we first met them, they were 2-month-old kittens, and Murray's name was Eclipse, which we totally hated and changed on the car ride home. Simon's name has always been Simon. The boys also had a sister named Simone, whom I've always felt guilty about leaving behind, even though I was told she was adopted the day after we adopted Simon and Murray. 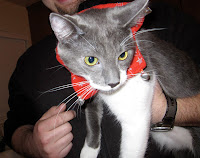 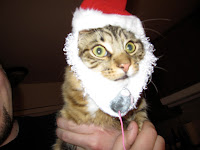 The boys came to the Humane Society by way of a passer-by who'd seen their mother get hit by a car. He scooped up the litter and brought them to the pound. The mother died and the kittens had to be hand-fed, so they grew up very friendly with people. 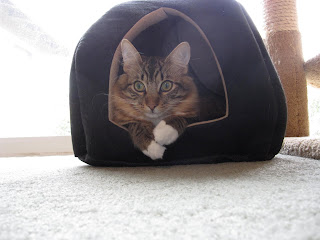 I'd been begging my husband to let me get a cat for years, and we were in our house for nine months before I finally wore him down. When we went to the Humane Society, he couldn't resist adopting two. 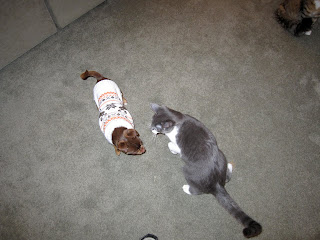 Murray meets my sister's dog, Gilligan
They're really the best cats you'll ever meet. They never bite or scratch and they're extremely curious and friendly. They get into a heap of trouble, of course, always going where they're not supposed to. 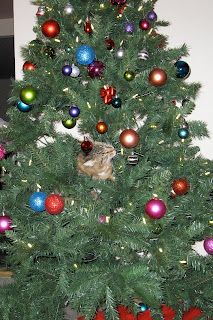 Simon in the Christmas tree, chomping on the twinkle lights
I keep waiting for them to start hating each other, as I always hear about when you adopt two cats they're usually territorial and jealous and fight all the time. But while they'll play-fight, these two are lovers all the way. 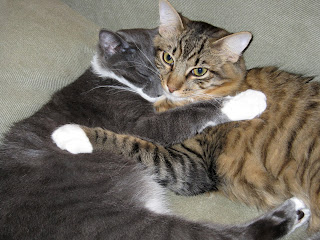