Last night's dinner was from recipes in Everyday Food's May 2010 edition. I do it my way, which is to say that I use measuring cups and spoons as little as possible because it drives me CRAZY to have to measure stuff every time I want to make a simple meal.

First I tackled the ricotta dumplings, because they just sounded so delicious, even though they involved making a dough, with flour, and there's nothing I hate more while cooking than using flour. It just makes such a damn mess.

I mushed together a bunch of ricotta, romano cheese, egg yolk, lemon zest, salt and flour. I rolled them into dough snakes and then cut them up, like so. 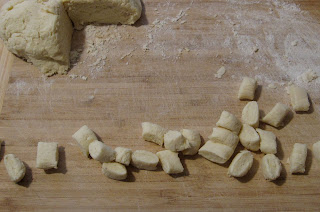 Then I boiled them for two minutes, drained them, and then threw them in a skillet with a mess of butter. You let them brown on one side for about six minutes, throw some more romano on top, and this is what you get. 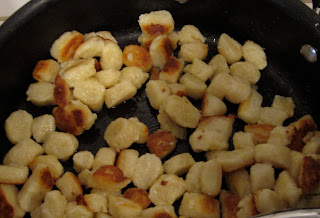 I popped a couple in my mouth to make sure they were OK. They were decent. Cheesy-ish, a little crispy.

The pork milanese was your run-of-the-mill milanese, with cutlets I salt-and-peppered, then dragged through a vat of flour, then fried. The recipe called for the cutlets to be topped with an arugula salad that had radicchio and red onion in it, with a dressing of olive oil, lemon juice and minced garlic, but because arugula and radicchio kind of suck ass, I just chopped up some romaine. So there!

Here's what I ended up with. I was a bit underwhelmed with it, although my husband really liked the dumplings. I always forget that I'm not a huge fan of pork cutlets or pork chops. They're just sort of meh. Seemed like a lot of work for not that great of a taste. I will say I enjoyed the dressing on the salad, although I think it would be good without the garlic, too. 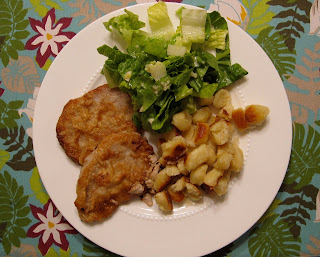 It seems they have not posted the recipes for these dishes on the site yet, probably since the magazine just came out, so I can't link to any of them yet. But if you're interested in any of the recipes, just let me know and I'll post them here.
Posted by Erin at 10:55 AM