So a funny thing happened over the weekend.

My husband and I went with another couple to a comedy club to see Doug Benson. 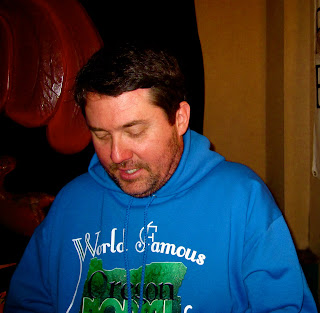 I realize this is not a good photo of Doug. He is signing my friend's passport in this photo.  I also realize it was probably not a good idea for my friend to ask Doug to sign his passport.
You may remember him from "Last Comic Standing," or he also did a movie called "Super High Me." And stand-up on Comedy Central, etc.

So I didn't realize that Doug's whole shtick is centered around marijuana. He was wearing an ugly sweatshirt that said something about a cannabis faire somewhere, and the dude just looked ... well, super high. His eyes were half closed and he looked like he needed a shave.

But he was hella funny. I laughed until my cheeks hurt. Doug made fun of the way our guy friend was laughing (it's a hard laugh to describe. It's kind of like a woman sobbing), which just made us laugh harder. At one point he joked that he would meet anyone who cared to smoke pot outside next to the tire store after the show. At least, I thought he was joking.

Now after the show, our little group was huddled outside near the tire store, waiting for our cab, and Doug walked out, and without a word, accepted a pipe stuffed with weed (what are the kids calling it these days anyway?), took a drag and passed it on. Another fan lit a joint and passed it on.

Which was so ... strange. The last time I was at a party/gathering of people and pot was being passed around, I was in college. Now I am old and super-uncool and I was even wearing a paisley scarf and I'm pretty sure I did not look like someone to whom the pipe should be passed.

My group (Drunk, Drunky, Drunker, and Drunkest) went skipping over to the pot-smoking fan club, fascinated. We were saying things to Doug, and he was pretty much mute. I remembered a documentary I saw about comedians who all seemed to hate themselves. They are pretty much the most insecure people on the face of the Earth. This may hold true for Doug. Or else he was just super high.

I'm afraid there's no good ending to this story. Our cab arrived and we left and went back to our friend's house and ate pizza rolls.

Email ThisBlogThis!Share to TwitterShare to FacebookShare to Pinterest
Labels: i am dangerously close to embarrassing myself