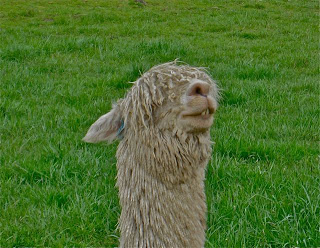 Every time I look at this goofy alpaca, I just about go hysterical with laughter. What kind of unfortunate animal ends up looking like a llama crossed with a cat crossed with a rabbit with dreadlocks? This poor bastard can't even see past the hair in his eyes. I've taken to making this toothy alpaca face at fellow vacationing family members for shits and giggles.
Today we ate too much food. My brother-in-law ate three breakfasts and all of the chocolate pieces out of the Moose Munch, for which he will be punished accordingly. The rest of us ate breakfasts befitting lumberjacks, although not quite as much as my BIL.
Then we went in search of wine. At the first winery, we were turned away by a harried woman wearing leg warmers (oh, I saw them, girlfriend) because Congressman Wu was due there shortly. But just after we'd been turned away, someone else convinced her to very begrudgingly invite us back. At one point, no joke, she proclaimed "I don't have time for this shit," so this of course became the saying of the day, followed by chipmunk-alpaca-teeth-face. We drank our wine as quickly as possible and got out of her hair. Right after my dad took a picture of her.
Then we harassed a herd of alpacas.
Then we went to another winery and talked crap about the girl who didn't have time for this shit to the girl who was pouring. We showed her the picture of the leg-warmer infractor. She said the two of them had gone to high school together. Then my dad took a picture of her, too.
Then we went to another winery and harassed another pretty girl. There are lots of pretty girls pouring wine in Oregon. My sister and I warned the new girl that our dad might try to take her picture. She said she didn't care to end up on the Internet (smart girl!) and took our picture instead.
Then we ate a late lunch/early dinner at a brewery. Some of us drank beer.
Later we watched "Lost" (Desmond is still on my freebee list).
It was a pretty perfect day.
Posted by Erin at 10:27 PM

Email ThisBlogThis!Share to TwitterShare to FacebookShare to Pinterest
Labels: alcohol, vacation, we are nerds