One week ago, my husband and I celebrated our 4-year wedding anniversary. Normally we take a little trip and do something fun. Last year we went to Napa and had a great time. This year, after everything, I mustered the effort to put on makeup and go out to dinner with a smile on my face.

We had a great dinner in Los Altos, accompanied by a bottle of wine. We came home and, feeling celebratory, I had a martini. The next morning I paid the price. I've always gotten extra nasty hangovers after drinking too much, and this was one for the books. As I lay in bed with an ice pack on my head, I could hear my husband pouring cereal into a bowl in the kitchen, and the mere idea of cereal with milk on it made my stomach turn so hard that I went running to the bathroom.

At first I thought he might be accusing me of being an alcoholic. Moi? Who speaks so reverently of wine and frequently has a glass with dinner? Does that constitute alcoholism? Not in my opinion. This wikipedia entry calls it "compulsive and uncontrolled consumption of alcohol," which is not the relationship I currently have with alcohol.

But after more discussion, I realized his point was that perhaps we should take a step back and evaluate our alcohol intake. And after only one week of abstaining from alcohol, I admit I've probably overused it.

My fatty fatterton self-help books talk about how people (me! me!) use food to feel happy, to feel love. Food is not what we seek but it's the tool we use, stupidly, over and over again, squashing down hurtful emotions, not knowing how to deal with the shitty stuff in our lives. I believe alcohol can serve the same purpose. Every night at my grandparents' house, I drank (and ate).

Love is not in my fridge, love is not in a bottle of wine. Nor is comfort. I don't want to make excuses for myself, allowing myself certain indulgences because I "deserve" them. It's not living in the moment and dealing with crappy thoughts and emotions as they surface. I still don't know how to deal with some emotions, but I do know I don't want to stuff them down with food and alcohol.

Anyway, this wasn't meant to be preachy. Actually, this entry took an unexpected turn. I expected to write about my husband, supportive man that he is. And he is. Except for the other night when I cut myself making dinner and said, "Ow. OW!" and he didn't say or do anything, and it hurt my feelings and I cried in the bathroom while I wrapped a bandage on my thumb, not because it hurt but because I am needy right now, and right then I needed him to express concern. I always say "Ow" when I'm making dinner, by the way. I am accident prone, and burning or slashing myself is pretty much a nightly occurrence. It's not his fault if he thought this was just another minor injury.

Yesterday I framed and hung a photo of us from about five years ago. We are at my sister's wedding. It was so hot that day, oh misery. It was blazing. I was the maid of honor, wearing a short coral jacquard silk dress and carrying a matching bouquet. In the photo, I am sitting on my husband's lap, but in that photo we are not married, or even engaged yet. 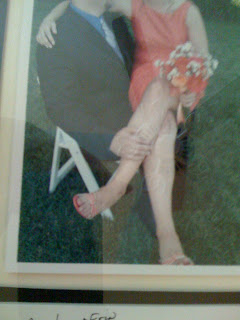 Hubs is a very private man.
We used that photo for our wedding, framed in one of those mats that people can sign. And I was proud of myself for hanging that damned photo, finally. You must see our house to understand, there is not a single thing on the walls, barring two calendars and one broken clock.

I looked at the mat to read what people had signed, and saw two of my now deceased grandparents' signatures, sending love forever in black ink on white mat. I can't find my mother-in-law's signature on there but she probably didn't find time to sign it that night. We sat her with a round table of her best friends, and I'd never seen her so happy.

It brings things full circle -- the anniversary, the deaths. I am lucky to have the man, lucky to have had the grandparents and Sharyne while I did, lucky to be healthy and alive and enjoying a fifth year of marriage with someone who makes me laugh until I can't breathe.
Posted by Erin at 10:15 AM