Everyone mourns in their own style, and the way I like to do it is to turn off the phone, throw a blanket over my head, and go to sleep. I find death exhausting.

Services for my grandfather were held yesterday. I'd never been to a Catholic funeral before, but Catholic is what my grandpa was, so it only makes sense his funeral would be as such. During the rosary, I closed my eyes for about 10 minutes. I may have fallen asleep.

All that chanting is calming and so I listened to it and zoned out. An elderly woman behind me was speaking slower than everyone else and ending her sentences like they were questions. Her "Hail Marys" ended with: '... now and at the hour of our death? Amen?'

I closed my eyes because I had an unholy urge to do one of two things. 1) Laugh hysterically. 2) Scream and run.

Screaming and running is nothing new for me. I often have the urge to do that at the grocery store and frequently wanted to do that in math classes.

The urge to laugh hysterically caught me off guard, because I did not find the situation funny. At all. But I'd start giggling and became afraid I wouldn't be able to stop. If I hadn't closed my eyes, I'd probably still be laughing. Or screaming. I'd be at the funny farm, maybe.

There was an altar boy with Down's Syndrome. He was picking his nose during the mass. That did not help my laughter problem.

My grandpa was wounded in World War II, shot in the arm somewhere in Europe. He has a Purple Heart somewhere. Can we find it? No. It's there somewhere, they say. 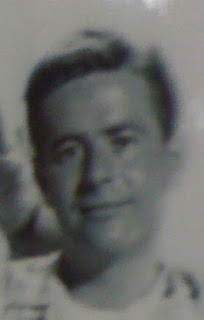 This is a picture of a picture, taken with an iPhone, no less, so not the highest quality. This is my grandfather at what I estimate to be the same age I am currently - 31. He would probably be really pissed off if he knew I put his picture on the Internet.

Grandpa, I will miss you. Please say hi to everyone. And also, I hope they have martinis and blackjack (and football) in heaven.

Email ThisBlogThis!Share to TwitterShare to FacebookShare to Pinterest
Labels: death, getting old sucks