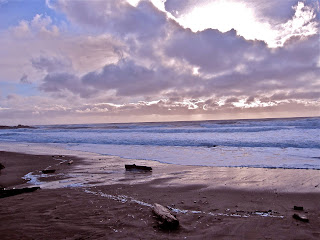 I'll admit it --that photo didn't look like that until I totally messed with it in iPhoto. For some reason, I'd never edited my photos before, but ya'll? Times have changed. Now every photo is going to get the royal treatment.
So the beach you see in that photo is my backyard this week. We are staying in my aunts' gorgeous beach house in Depoe Bay, OR, with my family. My husband and I drove up 101 on Friday. It took 11 hours, and we only got ticketed once!
My parents, sister and brother-in-law took I-5 and got stuck behind a 20-car pileup that delayed them for about three hours. They drove through five snowstorms. It took them about 15 hours.
Sunday, some family friends who live in Eugene visited us. They are a married couple with four good-looking kids. Hubs and I agree that if we had such good-looking kids, we'd hire armed security to follow them around.
Their father told us about the three separate incidents in which he managed to cut off three of the fingers on his right hand and have them reattached. Two of the incidents involved lawn mowers and one involved a giant paper cutter. He's well-known among emergency room attendants.
On Easter, my dad and I did a little light jogging and my leg didn't hurt too bad. Then us ladies went shopping and later we ate brisket. Mmmm, brisket.
It's exciting stuff. We're trying to figure out what we're going to do today. It's raining, and expected to continue doing so every day except for part of the day on Wednesday. I think I see wine-tasting in my immediate future...
Posted by Erin at 11:56 AM

Email ThisBlogThis!Share to TwitterShare to FacebookShare to Pinterest
Labels: vacation