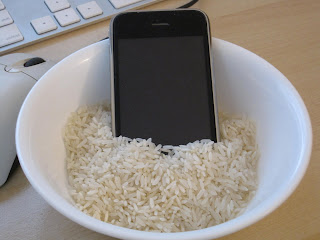 This morning I was watching Regis inspect a silver Aston Martin on TV. I was sitting with one leg crossed over the other. My iPhone was sitting on the top leg. I was resting a cup of coffee in my lap. It doesn't take a genius to figure out what's going to happen next. It's like watching a child play with matches and tinder, or kittens and knives.

The iPhone slid quickly down my leg and plopped ass-first into the coffee. I frantically dried it off. I checked to see if it was still working, and it was, but it thought I was trying to plug in a device that wasn't working. That'd be the coffee, which is probably working its way through the phone's innards like a slow poison.

The Interwebs says to turn the phone off and set it in rice to draw the moisture out. So I've done that.

I'm disappointed with myself, but not surprised. I've always sort of felt I shouldn't be entrusted with anything too nice, and luckily this phone is a hand-me-down from my husband. Nonetheless, it did cost a pretty penny initially and I'm not sure I'd be OK with buying another one.

It reminds me of a time when I went to Tahoe with my grandparents. I was probably between 8 and 10 years old. In photos from the trip, my sister and I are wearing some pretty hilarious outfits. In one I've got neon green leggings on and she's wearing black biker shorts with neon blue stripes on the sides. Remember when biker shorts were in?

Anyway I had this really cool Esprit watch. Each of the numbers on the dial had a little decorative smear of paint next to it, in all different colors. Color was REALLY in.

At some point during that trip, I lost my watch. I was heartbroken. Really. It was just a cheap plastic watch, but my parents had gotten it for me and I was afraid to tell anyone I'd lost it or ask them to buy me a new one. So I didn't. And whenever I think about that trip, yes, I remember how much fun we had with our grandparents, but I always think of that watch first.

So I won't bust out the violins quite yet. No funeral arrangements are yet necessary for this beloved iPhone (which I've been using for only one month. Somehow I managed to not mortally wound the shitty Razr phone I had for several years but give me a $400 smart phone and PLOP it goes into a cup of coffee!). But please send my phone good cell juju today.

If you need me, I haven't yet permanently damaged the land line.
Posted by Erin at 10:25 AM

Email ThisBlogThis!Share to TwitterShare to FacebookShare to Pinterest
Labels: dammit