Why such schlotlz coming from this nebbish?

I learned that this morning, from a web site called hebrew4christians.net, believe it or not.

It means Why such arrogance coming from this incompetent nerd?

My sudden interest in Yiddish stems from a conversation with my parents last night. They'd spoken to my grandfather recently, who'd told them that some big-wig car guys come into town to race at the Bonneville salt flats. They stay at his motel and "act like they're the Big Macher Shammes." I can really only guess that is how it's spelled. It means literally The Big-Shot Control Freak. According to hebrew4christians, that is.

We are not Jewish, but my grandpa worked for some Jewish business owners in Chicago about five thousands years ago, and apparently hasn't forgotten his Yiddish.

Anyway. This post is going to be kind of all over the place. Just warnin' ya. Kind of a weekend recap.

Friday night I made stromboli, which was a huge pain in the ass because it involved pizza dough, and anytime me, pizza dough, and a rolling pin are within a yard of each other, maniacal screaming ensues. Seriously. There is nothing more irritating than wrestling dough into the shape that you want it. I'd just about sworn never to make stromboli ever again, and then I tasted it and it was, like, little pieces of heaven on my tongue. We ate that and drank a bunch of wine and watched "Who Do You Think You Are," which I believe I've mentioned is the best new show on TV.

Saturday we went to 14 different hardware stores to find cord covers that we could have bought at the first hardware store that we went to. Simon has been chewing on lamp cords and TV cables, etc., so we covered them up so he can chew on the covers instead.

Saturday night we ate dinner at Sam's BBQ with friends. It's a little salt of the earth hole-in-the-wall kind of place with the best BBQ you can get around here.

And then later we watched "Moon," which my husband had ordered on Netflix even though he'd already seen it, because in his words, he wanted me to see it because "I love it." For him to say he loves a movie is no small thing. Although, let me tell you, I was a little nervous because he also loves "Eraser Head," which as we know is the Worst Movie Of All Time.

But you guys? This movie? Was the bomb. I am sort of in love with Sam Rockwell now. The only thing I'd remembered him from was Charlie's Angels and I sort of hated him after I saw that. 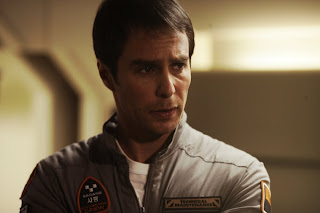 SamRo lookin' hot in his moon suit
The premise is that SamRo's character, coincidentally named Sam, is nearing the end of a three-year stint working on the moon, helping to harvest a resource that gets sent back to Earth to supply power. His only company is a machine named GERTY, which is voiced by Kevin Spacey. Sam is looking forward to getting back to Earth to be with his wife and daughter.

He starts going a little nutty and seeing things. He has an accident. He wakes up in the infirmary, with GERTY watching over him. He goes out onto the moon's surface where the accident took place and finds ... himself. The other him is still alive. The two of them have to figure out how there are two of them and what exactly is going on.

I cried. It was so good. Watch it.

Sunday we went for a drive on the coast and got stuck in crappy traffic on 17 because mofos don't know how to drive. And then. We saw my 'rents for dinner and discussed our upcoming trip to Oregon, which starts this Friday.

Less hok a chainik tomorrow.
Posted by Erin at 10:31 AM

Email ThisBlogThis!Share to TwitterShare to FacebookShare to Pinterest
Labels: i am dangerously close to embarrassing myself, tv will rot your brain