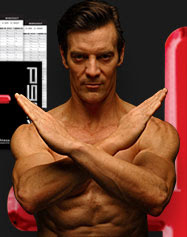 On Saturday, at a wine party (That's what it was. A wine party. With wine.), my friend Meagan flashed her She-Ra bicep at me, and it scared me a little. There is pretty much no doubt in my mind that she could knock me out with one punch. And then she said that she'd just purchased a shirt in size EXTRA SMALL. Now, I'll let you in on a not-so-secret: I've never been extra small anything, unless it was extra small motivation to get off the couch and get some exercise.

So it goes without saying that everyone was fascinated with the new muscular development in Meagan's arms and wanted to know just what in hells bells was going on. And she said: It's P90X. And I said: What the fuck is P90X?

As it turns out P90X stands for Power 90 Extreme, and involves 90 days of rigorous interval training that you do at home, while watching DVDs. It was developed by Tony Horton, who is one of these frightening-looking muscle-head guys with a 14-pack.

And as we all gaped in wonder at the beauty that is Meagan's biceps, we made a pact (I later mistakenly called it a "cult," but it's a pact. Yes. A pact.). It's called the P90X Pact (actually, it's now called the P90X Cabal. According to Merriam Webster, cabal means: The artifices and intrigues of a group of persons secretly united in a plot, as to overturn a government; also a group engaged in such artifices & intrigues. It can also simply mean club or group). There are seven members. In no particular order, we are: Catprick, Meagan, crazychristie, Kem, BMAC, D, and myself.

On Sunday, an inspired Catprick set up a Google group for us to join and sent us each an invitation. The invite in my email read: "As everyone knows, the best time to make any decision is when you're super drunk at a wine party. Those are decisions you can stand behind and stick with."

So, in the spirit of Clean Slate and Angry Determination, I shall be participating in the P90X challenge. I haven't yet started, since I had yoga last night. Tonight I need to pick up some resistance bands and then perhaps I can start this Extreme workout. I'll keep you posted on the cabal's progress.
Posted by Erin at 9:31 AM