A vacation from the holidays 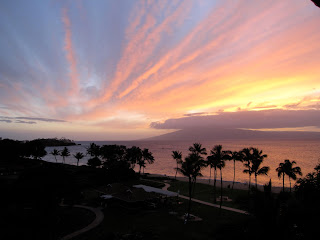 A year ago Hubs and I agreed that we would take a week-long vacation to Maui with my parents, which we did a couple of weeks ago. It came in the middle of what is always a maddening month of shopping and year-end work deadlines and everyone acting like a complete asshole and, to top it off, the weather always sucks balls in December.

So a couple of weeks ago, we got up at 4 a.m. so we could catch a 7 a.m. flight out of Oakland, and then we stepped off the flight and out of the airport and I stood for a moment in the balmy sunshine and if my skin could have moaned with pleasure and relief, it would have. I'd been told by my doctor about a month prior that I have a Vitamin D deficiency, which is largely caused by a lack of exposure to the sun, and, call me crazy, but I think my body was craving the sun. So I sat in it for seven days.

I wore a bathing suit and read silly novels and drank alcohol and sunned myself for hours on end and ate a LOT of food and altogether forgot that it was December and I would be facing a long list of to-dos when I returned. I watched the sun set and I stared at the ocean and I thought of things I want to accomplish next year and I slept for hours and hours and I looked in the mirror one morning and realized I looked younger.

I have never, ever taken a vacation where I did nothing. Where nothing was on the agenda except for lazing around and eating. Until now. It was the best thing I could have done for myself.

When I returned, I spent one frantic day running around Christmas shopping, two 12 hour days at work, and countless hours wrapping gifts (why does it take so LONG?). Hubs and I went on a fruitless search for tamales and then had to clean the house and make dinner in preparation for Christmas Eve guests. Christmas passed in a blink and when I think of it I see torn wrapping paper and smell champagne and feel tired.

Another year has passed and another lies before us. I am preparing my list of resolutions in my head, soon to be put on paper. I love making resolutions -- it's the keeping of them that I'm not so good at.

Another year is in sight and if you look at it as a new beginning, anything could be possible. We're not too old or fat or unhappy or cynical to accomplish anything we want to.
Posted by Erin at 4:03 PM