Forcing the Shatner upon you 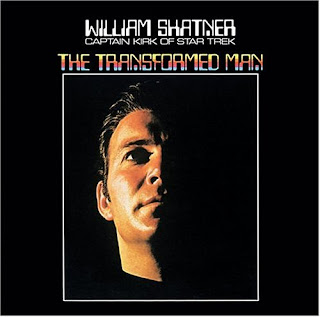 Several years ago I was dating (I use that term extremely loosely, since I never even kissed this guy) this nice fellow who thought I was a "really good hugger" and told me he desperately wanted to see me naked, but since I was not in the mood to deflower him, I instead settled on stringing him along for an agonizing month or so, since my friends insisted he was such a great guy that I should give him a chance. This is where my 5th grade teacher, Mrs. Raimondi, would throw her chalk at me for run-on sentences.

Anyway I was sitting on a futon in this charming young man's apartment one evening, listening to William Shatner's "The Transformed Man," for the first time, and I was so floored by what I heard that I declared then and there it would be my mission in life to purchase this CD and listen to it until my brain melted (coincidentally, are you familiar with the Star Trek episode in which Spock's brain was stolen?).

My delightful male friend took it upon himself to purchase the CD for me immediately, wherein I subjected all of my work-mates to it incessantly, until they agreed that it was the most hilarious thing they'd ever heard and we were all clutching our stomachs from laughing so hard and exclaiming, "Mr. Tambourine Man!!!!"

You have to hear it to understand how completely hysterical it is, but just trust me on this one.

Anyway, segue to me, married and plump several years later, snorting with laughter in bed while reading Shatner's "Up Till Now" (don't ask me about the "till," since I certainly understand until is not spelled untill and anyone who shortens until with till is obviously demented, but maybe there's some explanation for this later in the book and I haven't gotten to it yet).

Can I just say that William Shatner is up there at the top of my list of celebrities who I want to hang out with? He is. I'd like to go to his favorite Italian restaurant with him and have him explain to me where the rest of his favorite restaurants are and tell me hilarious stories about lies he's told the media. I want to know more about the crazy landlady who smashed half of his belongings with a hammer. I want him to "sing" for me.

Long story short, you should read "Up Till Now," misspelled title and all. If you think it is hilarious, we are kindred spirits.

Also, that poor guy I dated, he was about six inches shorter than me and had, I think, two lazy eyes, and a body odor issue that was probably the main obstacle to our getting any closer, physically. When I broke it off with him, he sent me a "break up box" that included a sad letter and a CD of sad songs.

All the girls at work thought I was a real bitch.
Posted by Erin at 11:52 PM