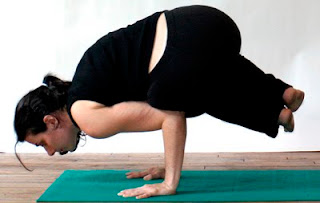 An example of a pose some of the people in last night's class were actually able to do. If I lose, like, 40 pounds, I could probably do it.
Last night I tried a yoga class that was led by a mustachioed man who bragged that his classes "do tend to be a little more advanced." If you think that stopped me, aka Old Iron Legs, from attempting to bend over to touch my toes, you'd be sorely mistaken.
Today I feel approximately how I'd expect to feel after being bound in a burlap sack and beaten for an hour with a baseball bat. My body is basically making a statement today, and that statement is, "Next time you want to attempt to balance your entire weight on your triceps, try taking a look in the mirror first, girlfriend. It might be time for a reality check."
Nonetheless. I did it. An hour and a half of yoga, and I survived, albeit jello-legged and drenched in sweat. I attempted a number of poses that I don't expect to ever be able to actually do, but some which I look forward to some day being able to perform correctly and without falling flat on my face.
Posted by Erin at 1:34 PM