In the very early hours of the morning that I got married three years ago, my little sister miscarried in the upstairs bathroom at my parents' house. She was two months pregnant.

Because she is so strong, she muscled through the day as my matron of honor, allowing her tragedy to be overshadowed by my wedding. Later that night, in the honeymoon suite, I bawled over the loss.

A few months later, my sister began to lose weight. A lot of weight. Without trying. Rather, she was hungrier than usual and eating whatever she wanted, but it didn't seem to make a difference -- the weight just kept falling off. She was gray and moved slowly and seemed disoriented and tired.

It took a while for the doctors to figure out what it was. At first they said it was Type 2 diabetes. My sister radically changed her diet and began taking medication. The weight loss slowed, but continued. She still felt awful, all the time. The diagnosis changed.

Often referred to as juvenile diabetes, Type 1 is believed to be an inherited disease that causes the pancreas to stop making insulin. Type 1 diabetics must test their blood sugar all day long by pricking their fingers to draw blood, and then must figure out how much insulin to inject themselves with, making sure never to fall too low or go too high. My sister is in constant danger of falling too low, and there seems to be no rhyme or reason to when her blood sugar will be too low or too high.

Since her diagnosis, her blood sugar dropped too low one time, and she had a seizure at home one evening. Thankfully, she carries an emergency syringe of insulin with her everywhere she goes, and her husband was able to administer it before paramedics arrived. Without it, she could have died.

Nowadays, she's outfitted with an insulin pump that is attached to her body through a shunt in her stomach. She carries the pump with her everywhere and she tells it how much insulin to give her. The pump simply makes it easier for her to administer insulin -- it does not remove the risk of her blood sugar getting out of whack.

Although she does her best to stay healthy by eating right and exercising, as a Type 1 diabetic she will always be at risk of serious health problems that can affect her eyes, kidneys and nervous system. And having children, which she wants desperately, is not as simple as just getting pregnant.

Type 1 diabetes doesn't get the kind of press that many other diseases, like breast cancer, get. There are a number of reasons for this, I think. Firstly, many more people get breast cancer, so it affects a lot more families. Secondly, Type 1 diabetes typically strikes the young, who don't really know how to advocate for themselves (That's not to say that advocating for breast cancer research is not a worthy cause. I've personally lost someone very dear to me to that awful disease, and my grandmother who passed away last November had one breast removed many years ago as a result of breast cancer. She wore a prosthetic for more than 20 years).

At any rate, I've jumped onto the Type 1 diabetes research fund-raising bandwagon. This was my first year of true participation (last year I just donated). I inundated friends, family & co-workers with emails and facebook updates with pleas for donations, however small, and then on Sunday my sister and her rag-tag team of supporters -- myself, Hubs, my friend C-dog, and my sister's husband -- walked a 5k with about 1,500 other people who came out to support the Juvenile Diabetes Research Foundation. It felt so good to do it. It was such a simple act, but something about being there, united with hundreds of other people for a pure and honorable purpose, felt fucking good.

Our little group raised $795, and we were so inspired while we were there that we vowed we would do it up bigger and better next year. We're determined to do everything we can to find a cure for this disease, and we're welcoming anyone who wants to join us next year. 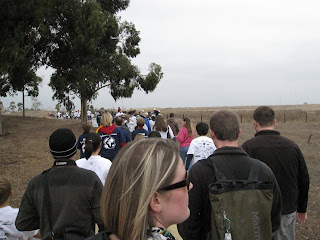 Email ThisBlogThis!Share to TwitterShare to FacebookShare to Pinterest
Labels: Betis