My brain feels disorganized and unfocused today, so I'm just going to blog about miscellaneous junk.

- A friend I hadn't seen since in quite some time said on Saturday that she has embarked on a new diet but refuses to blog about it because she is convinced that when she blogs about her ambitions, she fails at them. In related news, I read today that you are 50% likelier to be obese if your friends are, and 20% likelier to be obese if a friend of your friend, whom you've never even met, is obese. Something about "social contagion," a mystery scientists are trying to figure out so they can convince us all to lose weight and stop smoking.

- I am in full dread of the heat we are expected to experience this week. The entire week is supposed to be blazing ass hot, and nothing completely saps my will to live like a 100-degree day. There are things I'd like to get done this week, but I probably won't. There's nothing more awful than folding hot laundry in the heat.

- Sometimes I expect all of my friends to be completely up-to-date on my life goings-on simply because I have blogged about them. As if they have nothing better to do than read my blog or what I have written here could be that interesting! I might think that having my period twice in one month is completely fascinating reading material, but some of my friends might beg to differ! I came to this realization this weekend during a brunch with brilliant former & current journalists who continue to invite me to social gatherings because they are insane, probably. Several were current on my painter situation, but many were unaware of the saga that has been Me Trying To Paint My House. Which actually only benefited me because I then got to tell the colorful story of my painter and his arrests and why I think I might bury him in my backyard.

- For the record, the painter showed up at the house today, with two helpers in tow. He's patching & caulking. Painting is supposed to be done by Thursday. I will believe it when I see it.

- I am wearing a dress today, which has really thrown everyone, including me, off. I fucking hate dresses.

- While visiting with friends on Saturday, we saw a weird couple making out on the grass. They were a bit mismatched -- she was kind of large and looked older than the boy, who was small and geeky. They were having a major grope session on the grass in front of God and everyone. Including several newsy types who promptly snapped photos of them and posted them to facebook & twitter. We mostly stood close by with our hands on our hips, discussing their makeout session with a play-by-play. "Ohhh! She's grabbing his thigh! She's grabbing his thigh!" 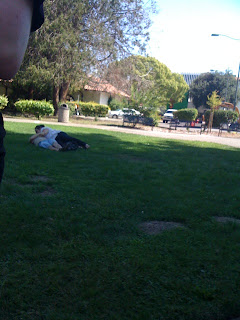 Email ThisBlogThis!Share to TwitterShare to FacebookShare to Pinterest
Labels: fat, other blogs are better, weight, wtf