Hello, my name is MOAM, and I will be your social retard for the evening

If you must take me somewhere, perhaps to a party or some such similar gathering of people, just dress me in a shirt with the following writing on it: "Does not play well with others." Consider placing a dunce cap on my head, sit me in a corner, and ignore me while I daydream about how I could very quietly be lying on my couch, reading "Smooth Talking Stranger." (A guilty pleasure, all right? Someone at work loaned it to me and yes it's got quite the handful of steamy sex scenes, thank you very much!) 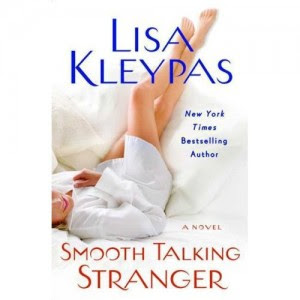 See, I'm the person (the ISFJ, per my most recent post) who answers the following personality test question in the following manner:

"Often you prefer to read a book than go to a party." YES or NO

It's not because I don't enjoy myself at parties. It's got more to do with a combination of laziness and a strong desire to be alone, quiet, in comfortable pants, rebuilding my sanity after a rough week at work. You may think you understand this sentiment, but in all likelihood if you and I lived together you might consider me a cross between a bore and a recluse.

Which is why I venture out to parties all Kuato style (a la "Total Recall), tucked like a deformed baby under Hubs' shirt. 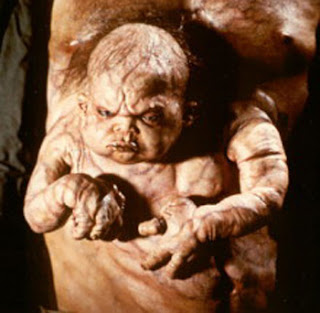 Doesn't Kuato look a little surly, and not more than a little unhappy to be exposed to the light of day?

Friday night I celebrated a friend's 30th birthday at a jam-packed surprise party, and it was fun. And then Saturday I celebrated Independence Day with several close friends, and it was quite relaxing, given the abundance of pool-side lounging, swimming, and eating. But at some point during the day, I reached my socializing breaking point. The breaker flipped and the lights went out and baby needed a bottle, a burping, and a nap. By the time I trudged my ass to the fireworks show, I was a surly Kuato, indeed.

It could be my Red Tent time preparing to rear its ugly red head. It could be that fireworks make me sad (it's a long story involving my rapidly declining grandparents). Or, being the social retard that I am, it's likely I needed a reboot involving being swiftly removed from the premises and placed in my soft bed with a pat on the butt.

Sunday I refrained from much social interaction. The most I spoke with anyone other than Hubs was to interact minimally with a Sears salesman while purchasing a refrigerator (this is a post for another time), and I also had a depressing conversation with my mom about my grandmother, who's apparently decided she doesn't mind being seen nude by her cleaning people. I finished "Smooth Talking Stranger," which I hereby highly recommend as quality beach/vacation reading. I washed sheets. I stared at the backyard. I drank half a bottle of wine.

Email ThisBlogThis!Share to TwitterShare to FacebookShare to Pinterest
Labels: i am annoying