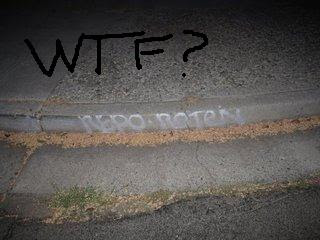 Last Monday, someone graffitied our sidewalk. Or rather, the curb. For the record, the "WTF?" in the photo is my personal artwork, courtesy of Windows. What looks like "REPO ROTEN" was written by some shithead who was saying, maybe, "This house should be reposessed because it is rotten."

What we found out from our neighbors several days later (why they waited several days to tell us is beyond me) is that our neighbor happened to be awake and looking out her window around 2 a.m. when she noticed several hooligans in hooded sweatshirts spray painting the curb in front of our house. What's seen in the photo is just a section of what was actually sprayed on the curb. As graffiti "artists" are wont to do, they'd repeated this nonsensical phrase three or four times along the curb.

Anyway, the neighbor called the police, and purportedly six squad cars pulled up in front of our house. One of those little assholes ditched the spray paint in our landscaping (a term I use loosely) and since the cops couldn't prove that these little shitheels had just defaced our property, they gave them a hard time for a few minutes and then let them go.
Mind you, our bed is maybe 30 feet from where some of this took place, and we never heard anything. I recall getting up to pee around 2 a.m., which is unusual for me, but I didn't see or hear anything.

I got up the next morning and saw the neighbor whose wife had called the police mere hours before, waved and said hello, and he never said anything to me about the incident. I drove to work and we didn't notice the "art" until later that evening when we got home.

Hubs managed to scrub it all off with graffiti remover, and later in the week someone from the city actually came out to clean it up, not knowing it had already been taken care of. I was shocked that the city responded so quickly, but maybe it's because the cops had reported it, too.

Anyway, I was severely disappointed about this. We just bought this house 7 months ago and so far someone has dumped a discarded oven on the side of our house and now this graffiti incident. Believe it or not, we do not live in the fucking ghetto. We actually live in a nice neighborhood. Everyone takes care of their homes and yards and all of the neighbors know each other. Our neighborhood has been known to have block parties and we went to our next door neighbor's house, along with several other neighbors, for a Christmas gathering. Our neighbor keeps in contact with all neighbors through e-mail, too, and everyone is friendly and helpful.
We spent no small amount of money on this house. It's in a neighborhood that's known for its good schools, which is part of the reason why resale values are a little higher than in some other areas of San Jose.

When this happened, I stood on the street corner and looked at my house, looked at all of the other houses, looked down the street, looked for some clue about why something like this would happen. It's not the end of the world, but I still feel victimized. It hurt my feelings that someone would deface the property that we were only able to purchase after a lot of blood, sweat and many, many tears. Sometimes people do things with a blatant disregard for how it will affect other people. That's why a lot of the awful things in this world happen. On the "badness" scale this is pretty far left, I know, but it's not something I want happening at what I'd hoped would be my happy and safe home for many years.

At this point I've decided that once we can stomach the idea of moving again, and we can get out of the house without a loss, we're moving to a nicer area. It won't be a house on a corner, like this one. If I never hear from Hubs again about how we shouldn't have bought a house on a corner, it will be too soon. So that's a tip to everyone out there: No corner houses. I could list a number of other reasons why it's unwise to buy corner houses, but will leave it at that.
Posted by Erin at 12:19 AM