Peekaboo! I can see your vagina!

I know what you're thinking: That I just wanted to say vagina. And you'd be right, except for that I actually have a valid reason for blasting you in the face with female anatomy today, and not just because I'm a huge fan of "The Big Lebowski" (Does the female form make you uncomfortable, Mr. Lebowski?) or because I read "The Vagina Monologues" several years ago and have, ever since, enjoyed bringing vaginas up in casual conversation.

What I am getting at is this: peekaboo bathrooms.

Have you heard of this new-ish trend? Several hotels that it would cost you a month's worth of groceries to stay at for one night are putting in these peekaboo bathrooms. I just heard about this because a friend I sit near at work has booked herself a hotel room at The Standard in New York, NY, and one of the many amenities listed happens to be a peekaboo bathroom.

We batted around a few theories on what this meant. Perhaps there's a window in the shower and you can peer out at the Hudson while you wash your nether regions. Perhaps it's even a full wall of glass that faces the outside world. But heck, if you're up high enough, it's not that big of a deal. Perhaps it's frosted glass on one side of the shower that lets other room occupants see your general shape as you shower, but not the details.

Below is a photo showing the placement of the shower in a room at The Standard. It's right next to the bed, and has a glass wall, and no curtain. 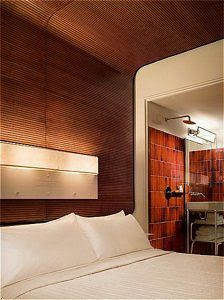 My friend is staying in this room with her son. Pardon me sonny boy, you don't mind if Mom takes a quick shower, do ya? Sure Mom, I'd love nothing more than to be scarred for life by glimpsing your aureolas in the shower!

Good God. What think ye of these peekaboo showers? I could swing it if it were just me and Hubs, but there is pretty much not another person on the planet that I could share this room with comfortably.

And with that I bid you a happy Tuesday.
Posted by Erin at 11:16 AM

Email ThisBlogThis!Share to TwitterShare to FacebookShare to Pinterest
Labels: wtf