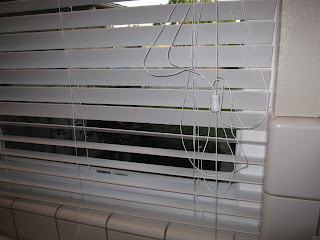 On Saturday we decided it was time to finally purchase some window coverings for our home, which we have now lived in for almost 8 months. For reasons that I will not exhaust you with, we were unable to find window coverings (basically it is because we are lame) for all but one window, which sort of already had a covering on it. It was the kitchen window, which was previously covered with this very grandma-esque curtain thing that actually was put up by a grandma. Who died.

Anyway, we went to Home Depot first and found some blinds, which a 17-year-old girl assured us were very easy to install, and if you had to shorten them (because these were not custom made blinds), that was very easy to do as well. In fact, she herself had installed these same blinds in her home, she claimed.

Cut to Hubs naively beginning the "simple" task of installing blinds in our kitchen window. After installing the brackets to hold the blinds up, he placed the blinds in the brackets and they fit in the window just fine, aside from the spare slats that were stacked up at the bottom and would obviously have to be removed.

Simple! Right? Right. So Hubs snipped and snapped, he tugged and shoved, he tested and retested, and these mofos still weren't quite right.

The photo above shows the blinds about half way through the installation process. Note the jacked-up pull chord and the snipped off bits at the bottom of the blinds. Such a PAIN IN THE ASS. They look much better now, but it took some doing.

Lesson learned: Either pay for the appropriately sized item or pay someone else to install it.
Posted by Erin at 7:24 PM