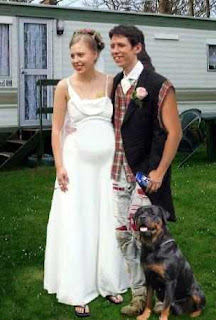 We had Hubs' deceased grandmother's mail forwarded to our house, since she's obviously no longer living in hers, and someone else soon will be. So far we've been getting a plethora of old-lady mail. She renewed Reader's Digest and TV Guide until the end of time, so we're pretty much set there. Occasionally we receive some of that shitty mail meant to trick old people into donating money to nutty causes, when it's really some fucking thief who should be killed. Immediately.

On Monday we received a wedding invitation for Grandma from some Vermont relatives who, as Hubs said, "didn't get the memo" about Grandma passing away (which, by the way, she's been gone for about 10 months). The invitation included a photo of the bride-to-be and her groom. The groom was wearing a John Deere hat and the bride had long 70s hippie hair. The invite stated that there would be a pig roast following the ceremony, and that it would be BYOB. Seriously. A wedding invitation that tells guests to bring their own beer!

Hubs joked that we should check the box "No," that Grandma would not be attending, and enclose a copy of her death certificate with the RSVP. We found this to be hilarious and laughed uproariously for a good couple minutes. We are only a little morbid.

We also got a graduation announcement from, presumably, the bride's little sister. We'd never heard of any of these people. We surmise that the bride is Hubs' grandfather's sister's kid's kid. A second cousin or something. After his grandmother passed away in June last year, he and his father did their best to notify all of the family members for whom they could find contact information. Some were in Vermont, some were in Oregon. They counted on those folks to notify the rest of the pack, but there appears to be some outliers who, maybe, aren't in close contact with the rest of the family.

Hubs decided to try to find his cousins on Facebook, which elicited a big "pshaw!" from me. As if people who look like that go anywhere near the Internet! As predicted, neither of them are on Facebook, but they do have Myspace accounts. He emailed each girl and let them know their great aunt has passed away. We haven't heard back yet.

Much has developed on the Grandma house front. We finished cleaning it out -- a day I never thought I'd live to see -- and paid other people to finish the rest (carpet, paint, electrical, yard work, etc). And we now have tenants set to move in to it, which means that, shortly, we are set to become landlords.