So today I totally stabbed myself in the foot while I was making dinner. Jeopardy question: THINGS ONLY IDIOTS DO! How, you may wonder, did I stab myself in the foot while making dinner, presumably on the counter and not the floor? Well the knife fell off the counter, and being very clever, I danced out of the way with one foot and left the other foot where it was, approximately 42 miles away from the knife, but the knife still flew, point first, toward my heel, and stabbed me. I bled. It was no big deal though.

Knives today were really the least of my worries. I was having a very "Final Destination" kind of day. You know that movie where this group of friends avoids death because one of them has a premonition that their plane is going to crash? Except that really pisses off Death and they start dying in all sorts of gnarly ways? I totally did not see that movie, woulda had nightmares because I am very impressionable and still am having trouble with "I Am Legend," which most people agree is a very lame thing to have nightmares about.

Anyway the reason I was having a Final Destination kind of day is that I totally cheated death while I was driving to the hospital to see Diane's baby today. I was going quite fast, as I tend to do, in the right lane on Montague, and some douchebag in a red BMW in a lane to the left of me decided to make a right turn in front of me. You know, like he realized he needed to turn right at the light but he was not actually in the right lane, I was. I almost creamed his ass all over San Jose and Milpitas. And then that motherfucker had the nerve to give me the stinkeye after I very politely tore half the rubber off my tires stopping my car to avoid killing him, and possibly myself. I yelled "SHIT!" while I was braking. And then when he gave me the stinkeye, I was like, "You dumb motherfucker." Don't mess with me. I am hella gangsta.

So then on the way BACK from the hospital (I am getting to the baby part, hold on to your knickers!) some crazy bitch started driving toward me, going the completely wrong way. She almost creamed me all over San Jose and Cupertino. Here's me: "WHAT ARE YOU DOING YOU ARE GOING THE WRONG WAY YOU CRAZY BITCHAAAAAAAAAHHHHH!" I managed to make it out of that situation alive. She amazingly did not hit anyone and no one even honked, I think we were all so baffled and trying to take evasive action, there was no time.

And then the knife tried to cut off my foot. Final Destination, man!!!

So the baby! Elise. Not Craplicker, thank goodness! 7 lbs, 7 oz, 19 inches of perfection. I thanked her mother, Diane, for being my surrogate and then left with the baby. She's asleep in her bassinet at the moment. KIDDING. But that child is so cute and tiny I just want to bite her. It's a strange reaction, I am aware. 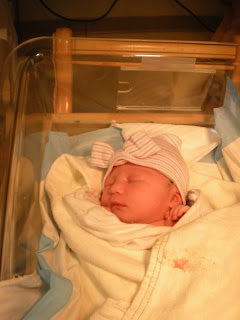