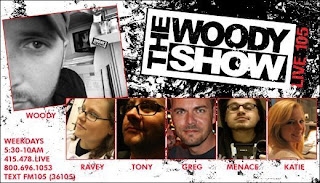 In what I am hoping is not an elaborate and extended April Fool's joke, Woody, Ravey & Tony have been fired by CBS from their morning show on 105.3 (in the SF Bay Area) for playing a 30-second teaser clip of a new Green Day song, according to Woody's twitter feed.
Greg & Menace are still apparently employed by the station, but obviously the Woody Show can no longer be, without Woody.
Woody says he can't go into further detail as to why three of them were fired and two weren't, only that it's now a legal matter. He's been interviewing with stations around the country and expects to have to move to stay in his line of work, which is typical for DJs. Meanwhile, his wife is 7 months pregnant, so he's a little pissed off about the whole ordeal.
Ravey also expects to have to move, and explains she is packing her shit up for the Salvation Army. It looks like she and Woody may be a package deal.
So as Hubs puts it, this officially gives us no reason to listen to this radio station any longer, since the music sucks major ass. If I wanted to listen to nonstop Red Hot Chile Peppers and Sublime all the farking time, then I would buy the CDs. Which I didn't. Because I don't want to.
This whole thing is rather strange to me. There is obviously something about being a morning DJ that means your employment is not guaranteed on any given day. After all, Mike Nelson was fired not so long ago from Alice's (97.3) morning show, also for mysterious reasons. Presumably, the show's mainly female listeners could not relate to him. The station brought back previously fired Vinnie to co-host with Sarah, but Vinnie openly admits he was fired because he was an addict who couldn't get his shit together.
Long story short, good luck to 105.3, cause they're gonna need it.