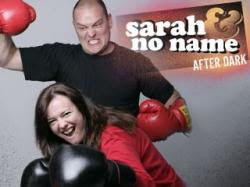 Update! According to The Poop, No Name, aka Mike Nelson, will be the new host of 105.3's morning show, which will be called, creatively, The No Name Show.

I will tidily skip over how I think the name "No Name" sucks and the title "The No Name Show" sucks even harder, because better kvetchers than I have gone there before so I'll let it rest. No Name, as you may remember, was once co-host of the morning show at Alice 97.3, before he was unceremoniously booted off, presumably for being unrelatable to the show's mainly female listeners. Now previously ex-communicated Vinnie has been reinstated as Sarah's whipping boy of the moment at that particular station.

I could never quite decide if I liked No Name or not. It irritated me when he would talk about shit and vomit at 7 a.m. So, I think he'll probably fit in well with the mainly male listeners at 105.3, provided he's a good little rule follower. As we know, his predecessors, Woody, Tony & Ravey, were axed for playing a 30 second clip of a new Greenday song. Which, LAME.

Woody seems to know about No Name's hiring, although he has little to say about it, judging by his Twitter feed. He's said to have already moved to St. Louis for another gig.

Interestingly, both 97.3 and 105.3's offices are housed in the same building in SF, so I am thinking there could be some awkward hallway encounters. Best of luck, DJs!
Posted by Erin at 5:50 PM