Three days off work and I am feeling fine, thank you!

We spent our 3-year anniversary in Napa, at La Residence Country Inn, which is actually a really nice place that is very reasonably priced and comes with a hot breakfast in the morning.

The inn's one major flaw is that it is right off of Highway 29 so not as countryish as desired. And there were a few condoms left in a drawer in the nightstand (ribbed for her pleasure, eeewwww)and someone had left a piece of cake in the fridge. But it was honestly a great place that I would go back to. The bedding was excellent, with awesome pillows, which is so rare in hotels. 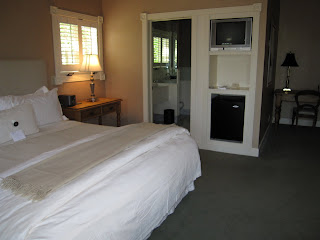 For our anniversary dinner on Wednesday, we went to Martini House in St. Helena, which I found in the Chronicle's Top 100 restaurants in the Bay. We were prepared to spend major skrill for this dinner but ended up paying around $200, which included two full four course dinners with wine pairings.

Words simply do not describe this dinner. It has to have been the best of my life. I got the mushroom tasting menu, which sounds strange and has no meat in it, but is simply divine. I can't describe this meal to you, I really won't do it justice. Simply go to this restaurant, and order this meal. With the wine pairings. It's $99. You will be so glad you did.

On Thursday we took the wine train, or as we joked, the Octogenarian Train, or Geriatric Train. In fairness, there were other young couples on board the train but they all seemed angry. Maybe they knew what was to come! I can't, in good conscience, recommend the wine train. It's just pretty much a rip off. A lot of the food was sort of awful and I didn't think of how the motion would affect me while trying to eat. The train went about 30 mph down Highway 29, for a distance that would take you about 15 minutes in your car but took an hour and a half on the train. So it was a 3 hour trip and I was so ready to get off that damn thing when it stopped. They did, however, give us these Anniversary balls, which looked a little like something else to us... 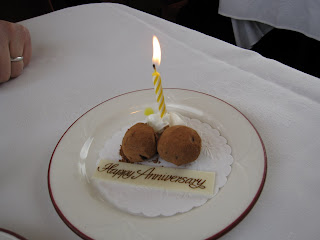 Later yesterday evening we went out for a decent dinner and bottle of wine. We immediately slipped into twin comas when we got back to the room (we're true romantics).

Today we enjoyed our free breakfast (sausage, eggs & potatoes!) and then skipped off to Castello di Amorosa, which is this giant castle in Calistoga that you can pay $30 to tour. We didn't but we did pay $15 each for wine tasting. The wine was decent. I'm sort of lame because I didn't take any good photos of that place. I was taking video, haha! No joke.

Then we hit up several of the wineries on the Silverado Trail, many of which have beautiful views and great cabernets. 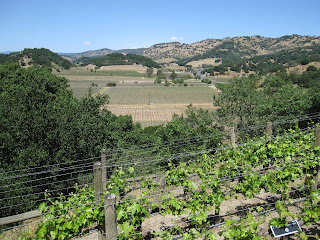 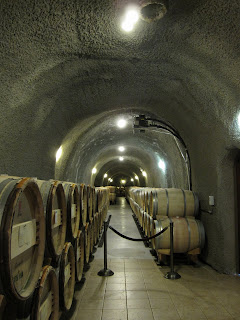 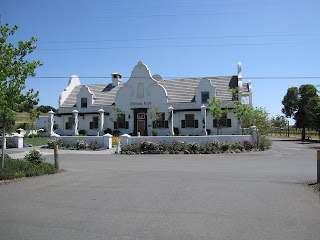 We bought some wine, ate some Taylor's Refresher (#2 hamburgers in California, purportedly) and then battled traffic on the way home. I'm gonna hit up the couch for a nap and then we'll move on to the rest of the weekend...