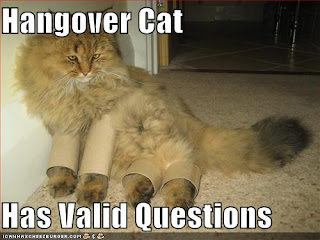 Last night I had two and a half margaritas that apparently contained brain-blasting amounts of tequila. I am not sure what possessed me, on a Tuesday night, to drink somewhat heavily, knowing that despite my greatest wishes, I would still have to get up at 6 a.m. and go to work.

And I have been dragging some major ass today.

It reminds me of how, as an intern in Florida, I would go out on a Wednesday night with some of the people that worked at the paper and we would just get blasted. I mean, blammo. It was a no holds barred, Wednesday night drink fest. Shall we order another bottle of wine? Need you really ask?! Glug glug glug BLAMMO.

I've always suffered worse hangovers than your average Joe, and I used to wake up, sticky in the Florida humidity with a stinger of a headache and my stomach threatening expulsion of all contents, and I would somehow drag my ass into that newsroom and who even really knows what I did during that internship. I have a number of humidity-ravaged clips proving that I wrote actual news articles while living for several months in the armpit of America, but I'm not sure I quite believe it was me.

Today was like God saying, "Woman. You are 30. If you think you can drink that much tequila on a weeknight and not suffer the consequences the next day, I've got something to show you."

Today was abnormally punishing as far as physical activity was concerned. Normally I'd be able to nurse my hangover from behind my computer but today I was literally staggering around all day in my high heels, for various reasons.

So after what has seemed like an eternity, I am finally home, forcing myself to update the blog, and in a few short minutes, if you want to find me, I'll be curled into the fetal position on my couch.
Posted by Erin at 6:47 PM