America, the Self Righteous

What is it that's so surprising about Michael Phelps driving under the influence, having sex with strippers and smoking weed?

Just because he's supposed to be Mr. All-American-I-Won-10-Gold-Medals-And-I-Love-Apple-Pie? As a record-breaking Olympian, he's supposed to be above all of the temptation that comes along with being adored by an entire nation and suddenly coming into lots of cash?

Allow me to explain the impetus behind Phelps' actions of late.

He is 23, he kicked France's ass in the Olympics, and he has a body that women of all ages, all over the world, have been drooling over since Phelps pulled his Speedo down to his hips and we all glimpsed the divine perfection that is his torso. Women are probably begging him to go to bed with them. 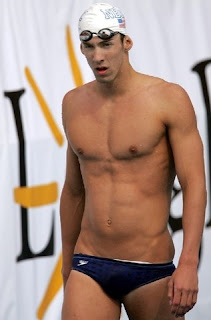 Thank God that, at age 23, I was only moderately hot and not at all rich or famous. Because I would have WREAKED HAVOC, people. Havoc, I say. It's hard enough to keep your shit straight when you're simply young, relatively attractive, single, footloose and fancy-free.

And it's no surprise to me that that's what Michael Phelps wants to do, too.

I mean, come on people. The kid busted his ass for years in the pool and the weight room in order to wipe the floor with every other country at the Olympics and make us proud. His free time consisted of eating 5,000 calorie breakfasts, snuggling with his dog and dorking out with his friends by playing video games.

So, come on. When you were 23, you weren't winning gold medals. And if you had been, you'd sure as hell feel that once you were done, you'd want to smoke a little reefer and have sex with some strippers.