On Thanksgiving, my 88-year-old grandfather explained that he and my grandmother had purchased a device while watching what was probably an infomercial. He explained that this device has been extremely helpful in cleaning the floors and that the commercial contained dogs. The more I listened the more confused I became. The device sounded like a cross between a mechanical dog and a Roomba.

This information led me to believe the device makes some sort of clacking noise.

Excited about his purchase, grandpa led my husband and I to the room where he stashes The Clacker. It was a broom/vacuum, similar to those seen in restaurants that are used to clean floors, although this one is battery powered and has suction. It did not make a clacking noise. Grandpa passed The Clacker over some crumbs, which obediently allowed themselves to be eaten by The Clacker.

The Clacker has led to several entertaining follow-up conversations. My mom later explained that grandpa has always nicknamed his favorite things. My mom was nicknamed The Raunch. My sister was nicknamed Cha Cha. Incidentally, myself and my aunt have never been nicknamed.

Since our return home, "clacker" has taken on new meaning. B and I have used it to substitute for the F word.

"Where the clacking camera?"

We've used it as a term of endearment.

We've used it as a verb.

"I was just clacking down the sidewalk and saw that cat from across the street."

We've used it as a noun.

Come join me, won't you?

Want to get in a fight? Merely speak, and I will find fault with your words. Merely behave like a human and I will find fault with your actions.
I am having what my husband refers to as my "monthly bitchy fiesta," and no one is really safe.
It is unwise to allow my bitchy fiesta to take hold, particularly at work during layoffs.
"Hmm, who should we lay off?" my bosses are probably asking each other. "Her. Definitely her. God, she's bitchy."
Posted by Erin at 8:27 AM 0 comments

Take a lickin & keep on tickin

Today the Dark Hand of Job Death passed over my place of employment and I emerged unscathed. One of my three fellow team members, however, did not. She informed me her position had been eliminated, and, being the Estrogen Monkey that I am right now, I promptly burst into tears. There are so many things wrong with the way the whole layoff went down that I can't begin to get into it. Let's just say I have a tough row to hoe ahead of me and a bottle of pinot calling my name.
Posted by Erin at 6:40 PM 0 comments

You've probably heard of the puppy cam that has enthralled everyone for the last couple of months, but have you seen it? My god. These puppies are seriously hypnotizing. I can't put my finger on why, and I certainly can't describe it in words. I watched for 5 minutes. One puppy got up to drink some water and sniff some poop on the pee pad that's laid out for them. Then it hopped back into the bed it shares with its sublings, walking all over them before finally sitting in a vacant spot. I looked away for a minute and came back and one puppy was lying half in, half out of the bed, having apparently decided to go play but falling asleep on the way out. Arrrggghhhhpuppppieeesss!!
Posted by Erin at 11:38 AM 0 comments

Meditation: Ur doin' it right

Because I am a basket case and looking for natural ways to lower my blood pressure (which: baby shower + Indian wedding this weekend = major diet blunder), I have purchased a book titled "Meditation for Dummies." I have never meditated, but from what I've read online, it's supposed to help your health in all sorts of fantastic ways, one of which would be the lowering of blood pressure.
My preconceived notion of meditation was that it was a lot of sitting crosslegged with one's eyes shut, repeating a mantra and trying to clear the mind. Apparently, it's a lot more. There are 20 chapters in "Meditation for Dummies," summing up to a grand 339 pages. Stay tuned for more details. I'll monitor my own blood pressure at home (which invariably is always normal when I do it anyway and then high at the doctor's office) and letcha know how that goes.
Posted by Erin at 12:44 PM 0 comments

I am, of course, still strictly following doctor's orders, thus, as my father-in-law would put it, life just ain't worth living. He once tried a healthy, low sodium diet in order to keep blood pressure down, but decided he'd rather brave the meds than give up his beloved pizza, hot dogs and various other sodium-laden and delicious foods. He now enjoys a cheeseburger whenever he feels the urge, and his blood pressure is low enough that I am envious. So since life has less meaning without food (I am pathetic, really, that I derive so much happiness from food), I am finding little inspiration to blog.
Posted by Erin at 6:06 PM 1 comments

Today my doctor says I must radically change my diet and start exercising in order to lower my blood pressure. I mustn't eat any salt whatsoever. I mustn't eat any carbs other than fruit and yams. I may eat Luna bars, whatever the hell those are. I may eat unlimited portions of vegetables. I must drink water when I wake, before each meal, and before bed.
Ahhh. I'd accomplished so much this year. Really, I'm just going down my New Year's resolution list and checking things off one by one. With less than two months until 2009, I've yet to lose the 20 pounds I resolved to lose this year, but it seems that with my doctor's strict instructions, this resolution may also be accomplished.
Now of course, me being me, this radical diet must come at the most difficult possible time of the year. My doctor actually had the hilarious nerve to suggest that at Thanksgiving dinner I simply shovel turkey into my mouth and avoid stuffing and mashed potatoes at all costs.
Posted by Erin at 6:15 PM 1 comments 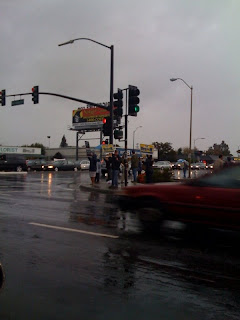 This photo was taken at the corner of Steven's Creek and Winchester in San Jose on Saturday. It's hard to see what's going on, so allow me to explain. There are people holding "Yes on 8" signs. And there are people holding "No on 8" signs. I found it interesting. This is one of the most heatedly debated propositions we've had in a while. This morning I received a call on my cell phone -- it was a recording of Obama stating his position on marriage: "A union between a man and a woman." Here's my position on his position: He's running for president and there's no way in hell someone who endorses gay marriage is going to get elected. For all we know, both Obama and McCain support gay marriage, but they would certainly never, ever utter those words aloud during this presidential election.

Anyway, let's all raise a beer tonight and toast the fact that this election is finally coming to an end. No matter what the outcome, it's historic. A black man as president, or a white dude with a female VP.
Gays keep their rights to marry, or those rights are taken away. Either way, my neighbor's "Yes on 8" sign will be coming down.
Minors keep their rights to abortion without their parents being informed, or those rights are taken away.
Utility companies are forced to go greener or they are not.
High speed rail from SF to LA is funded, or it is not.
The SF water district is renamed the "George W. Bush Sewage Treatment Plant," or it is not. (this prop was dreamed up by a dude who drank one too many beers and has a bit too much time on his hands. Not that I don't think it's hilarious)
Posted by Erin at 9:20 AM 0 comments 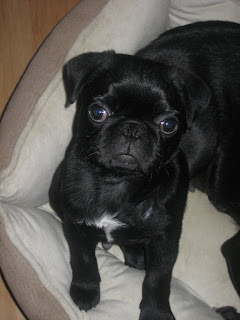 This is a pug puppy one of the gals I work with is trying to sell. It's CRW certified or something like that (breeding term, I think) and trained to pee-pee on pee pads although not sure it has the poo thing down.
But look at his little face. I just want to squeeze it right off.
So anyway if you also want to squeeze this dog's face off and you're willing to pay for it (it's negotiable), let me know.
Posted by Erin at 11:09 AM 1 comments