A Chance Meeting in Livermore

Whilst stumbling about various Livermore wineries, glass in hand, I ran into my sister and her husband on Sunday. That sentence does not sound bizarre, but if you really think about it, it is. My sister lives in Milpitas, and I in San Jose. I rarely go wine tasting; the last time was in April in Santa Barbara, for our anniversary. I'd never been wine tasting in Livermore. There are easily 50 wineries in the area. We spent an average of 20 minutes at each of about six or seven that we visited. Once we'd reached the last one, which we hunted for endlessly and agreed would be the last one due to our level of inebriation, we stood behind a small crowd that was already bellied up to the bar. At some point a number of people began exclaiming loudly at each other, and looking in their direction, I realized my sister and brother-in-law were among the rosy-cheeked group downing generous "tastings." Their friends, an older couple who'd invited my sister and her hubby along for the day, bought a rare bottle of wine for the group and shared it with the approximately 10 people in the tasting room.

Here's a photo of the gang hanging out, although you really can't tell who anyone is. My back is facing the camera, you can see the side of my brother-in-law's face, part of my sister's head, my friend Greg in his hat, and the happy gentleman serving wine behind the counter. This was at Elliston winery, which is technically in Sunol. They have pretty good wine, and a very interesting tasting room. 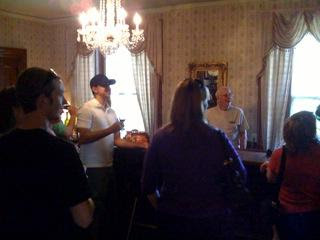