Yesterday we finally started the process of cleaning out Hubs' grandmother's home. It's been a long time coming, especially since she hasn't even lived in her house for more than a year. Everything is as she left it on the day we moved her into the care facility.

We are almost finished with the kitchen, and in the time we were there we made a few surprising discoveries. While I was cleaning out a couple of drawers, I noticed the bottoms were lined with newspaper. I thought about just leaving the newspaper in the drawers but decided I might as well throw it away. I lifted it up and found piles of cash. All totaled more than $500. 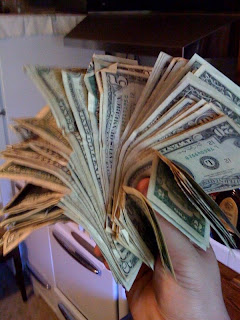 As we continued to clean, Hubs unearthed at least eight containers of salt (Millie swore by salt, it was a cure-all of sorts. That, and red meat): 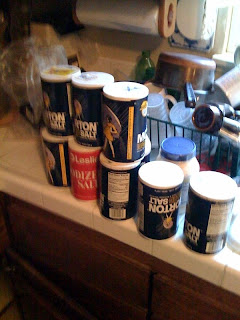 We'd sort of expected to find cash -- we knew she'd been stashing it in various hiding places. And the salt wasn't altogether too shocking. But what came next was more of a surprise; Something like 14 bottles of brandy. Each was wrapped in a brown paper bag and stashed in the furthest dark corner of her cupboard. 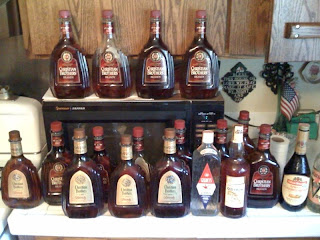 We can only guess as to why there would be so much brandy. It's possible it was all purchased when her husband was alive. He died 30 years ago, but it's not impossible that the brandy is that old, considering some spices we uncovered dated back to the 70s. It's possible she bought it for Bruce, her son-in-law, who will occasionally drink brandy. Whatever happened, she must have continued to forget about her ever-growing stash in the back of the cupboard. There were other finds: Large stacks of soap and toilet paper, stashes of plastic bags, towers of empty envelopes, caches of envelopes stuffed with tissues and napkins. One find Hubs found entertaining: dill weed. 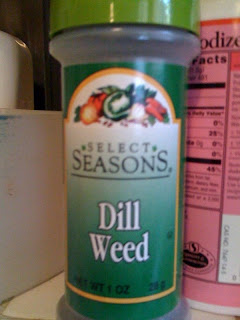